About three months back, one of my juniors at college, Deepankar messaged me that he and a few others had gotten the license from TED to host a TEDx event in our college. He told me that he and his team wanted me to be the Master of Ceremony (Anchor).

I was not so sure about it as the last time I was anchoring a show over a year and a half ago, it had not ended up that well. But then I thought, why not! It’s my final year in college and who knows when in the future I would again get an opportunity to go on stage in front of a good lot of people. Thus, I agreed. Then, once the date of the event was finalized, Deepankar messaged me again, sending me the necessary details like list of speakers, their brief backgrounds and other trivial stuff that I would have needed to prepare my script.

At last, as just a week was to go for the event to happen, I begun my work on the scripting. I was told to set up a formal script for the show. No punches or jokes. Minimal interaction with the audiences. I was also told to keep most of the show in English and to avoid using Hindi as the medium of conversation unless the speaker her/himself were to deliver their talk in Hindi. So bounded by those contours, that is how I prepped up the script and what I prepped up was what I rehearsed over the last two days.

And then finally the D-day was here. 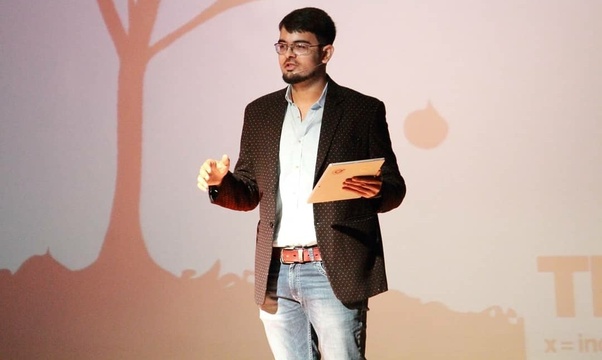 Suited in the blazer of a friend’s brother, and donning the aplomb of my mother, at 11:15 am on 25th August 2018, I walked to the centerstage as the three spotlights threw the beaming photons on me. And, there I was, shining in front of the 100+ audience to kickstart the show.

And, that is just what I did.

But, what I didn’t realize was that the entire team had gotten into panic as soon as I started. I had forgotten to turn on the mic and everything was being recorded. What’s worse? I didn’t even realize that my mic was turned off. Standing tall and strong on stage, I just didn’t feel that anything was wrong. Anyways, I corrected my folly soon enough.

That’s how I started the first half of the show, abiding by all of the rules and directives. And I sucked to a good extent. There were instances when I fumbled. There were times when I forgot what I had written in the script. It didn’t go as bad as I am making it sound right now with my way of narration. But, it just didn’t go that good either.

As the clock turned to 1:00 pm, I announced a 20 minutes break time, so everyone could go to the loo, freshen up, have some refreshments and relax before we could start off with the second half. And, these 20 minutes offered me a good lot of time to gather some courage to break all the rules that I had been told to abide by. After all, those rules were all that had been ruining my show.

Think about it this way.

Writing in English is my forte, speaking isn’t. When it comes to speech skills, Hindi is the language in which I exude confidence, not English. Similarly, being formal and stoic while on-stage, that’s not my natural behaviour. I am more about fooling around, trying some punches, some of which turn out to be good, while all others fall back hard on my face making the audience laugh on me. What the rules decreed was that I had to put up a formal show while I am just not that material. I am better made for hosting an informal setting instead.

And, what helped me muster the much-needed courage to break those rules was the fact that it is my Final Year in college, so why give a fuck about what could happen. Hence, I told myself, once on stage, it’s going to be me deciding which way the show were to go and as everyone returned to the auditorium after 20 minutes of break, I went back to the stage with a whole different kind of energy and mindset.

In this half, I did almost the show in Hindi. I cracked quite a few puns over the Organizing team and threw more of punches over myself. This way, I made fun of myself, gave the audiences some opportunities to laugh and relax, and enjoyed the aura as the it went from being a formal setting to an energetic event. Also, I ditched the script on several occasions and went with the flow, all impromptu, and the outcome was that I got to hear more claps than I had ever heard before in any show, event or competition where I was on stage.

I laughed on stage which I was told not to, I fooled the audience and later confessed that I was fooling them, I recited a four-verse shayari to baffle up the crowd and everything worked. People laughed and clapped just as I wanted. As the Master of Ceremony, this was just what I wanted to take away as a memory, and thus, it all felt just so right.

When the event came to its conclusive end, the first comment I got was from the cameraman, Abhishek, “Bhai konsa jaanwar andar ghus gaya tha tumhare iss half mein!”

Bro, which animal spirit got into you in this second half!

Almost everyone said, that the second half was a whole another game, a whole another me. The energy was on a different level and as the end kept getting closer, the fun and vivacity in the aura only kept going up and up and up. Even some of the speakers who had delivered their TEDx talks, they appreciated my efforts. One of them who had seen me during the rehearsals, he even said that it was a prudent decision of mine to ditch the script and directives and go all impromptu. Later on, some of the college mates also took out time to message me to applaud my performance and stage management in the second half. Similar sentiments were shared by the Organizers as well. Thus, everyone ended up happy.

Furthermore, many from the audience, who I had never even met before, they appreciated my stage skills and confidence as well. One said that I should do more of such anchoring gigs. Another one said that in the second half, I simply set the show on fire. I don’t agree to that person, but damn it felt so good when she said that! 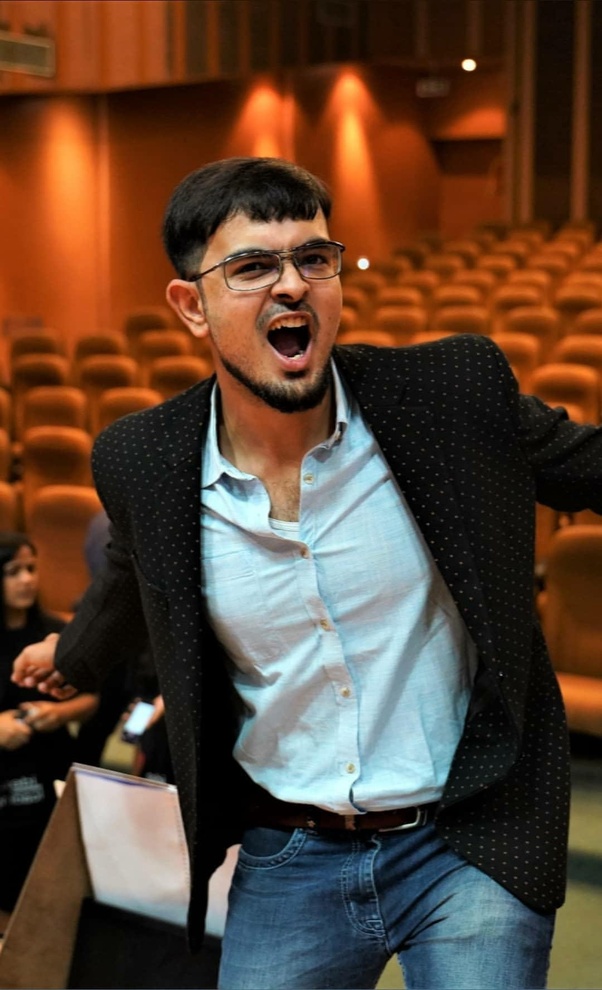 Do you see the joy and contentment on my face after successfully wrapping up the event!

All in all, it proved to be a fantastic experience for me. As I mentioned above briefly, the last time I was anchoring, it was about a year and a half ago. I had an experienced co-anchor who did her best to make me look good, and still I had sucked really bad. So bad that in the next year and a half I declined over six different opportunities to host events in my college, just because I was afraid that I would suck. And, compared to that experience, the way hosting TEDx ABVIIITMG turned out for me, it was an exhilarating experience from which I am taking away a whole lot of memories and confidence, ready to say yes to any and every opportunity to go on-stage which might come my way in the times to come. Bliss!

I have known Jayant for about a decade now. Jayant was nowhere close to this maverick ‘Shilanjan’. His novelty is impeccable. While he himself accepts his transformation from a dull quiet kid to an inspirational boombox of energy(in his own words), he is much more to me than just a guy who writes extremely well or someone who transformed … END_OF_DOCUMENT_TOKEN_TO_BE_REPLACED