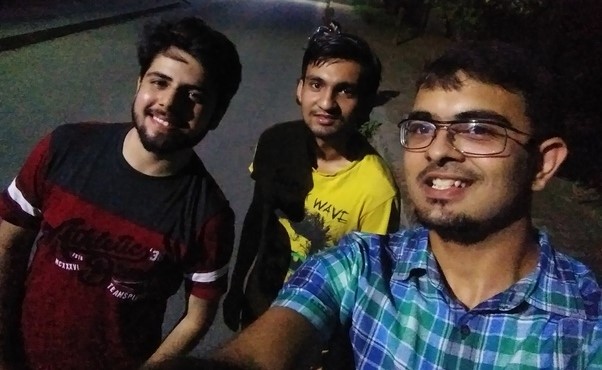 Nugget-46: Every Person Has This One Thing To Offer Everyone Else.

Yes. Every person has a story to offer. And, here is why it matters.

The guy in red is Keshav Soni. He is an old friend and I was talking to him the night before yesterday. We were talking to each other after a long time. In this course, he had gotten his first job, and I had not yet learned about his experience as yet.

So, as he was sharing a few of the nuggets from his corporate experience, he suddenly began to share a memory when he had talked about me in front of over sixty people in the workplace. It was in the first month of his joining, and induction phase was on.

The newbies like him were going through an orientation and training program to teach them how to deal with things in the corporate world. The instructor was sharing with them, how to talk, and behave with a colleague who doesn’t have a parent or both.

And, it was then when the instructor asked if any of the members had any experiences to share. Having read many of my writations, Keshav is quite aware of my life after I lost my father. Thus, he told everyone about me, my pains and the personal transformation that ensued in my life after Papa’s bereavement.

Because he felt that Keshav would understand and be able to relate. And, it was Keshav’s understanding of my situation and story which helped him bond with this another person. The only thing I am trying to share here is this:

Everyone’s story is a lesson to learn. So, listen, read, watch and observe.

Me writing about all of my experiences after losing my father, the struggles, the emotional and mental trauma and the amazing transformation that followed eventually, it had helped my friend Keshav to better understand what all a person having lost a parent goes through.

All because he had read my works not just to learn about my life, but to take away something valuable. It is that attitude which I just love. His knack to learn something out of every experience, be it his own or someone else’s helped him gain a perspective of what life is like when someone has lost a parent.

One man’s struggle, pains or life in general as a whole can be a lesson for another person. Given, that one man chooses to share his tale either by talking or by writing about it. And, there are a lot of such people all around us. There is no dearth of them. We are 7.2 Billion+ after all.

Most of us have just grown used to the presence of these people with great stories and thus have just stopped seeing the teacher in them and their lives. And, this is one attitude, which one should change. It’s not like Keshav only learnt from me. It’s the other way around as well. I too have learned a lot from this man.

Because I get that, every man has a story to tell, and every story has a lot of lessons to teach. One just has to look and listen intently. That is all one needs to do.

I know, how deeply I have been impacted by the stories and lessons I garnered from lives of people like James Altucher, Dr. Kalam, Atal Bihari Vajpayee Ji and also Indian stand-up comedian, Jeeveshu Ahluwalia. And, these are just some of the big names to quote.

There are so many people in my life who I have learned so much from. And, I would not have been whatever good I am today if it had not been for the lessons from the lives of these masterful souls. And, I know the value that the ability to look for a teacher in every person can add to any individual’s life.

Ergo, whosoever the other person may be, see them as a teacher. Because all of them have a story to offer. And, you never know, which one story may change you and your life for the best. Bliss!

When a light passes through glass it stills remain a streak of light ,but when your doubts passes through Jayant ,it works like prism 🙂 I didn’t know someone could pack inspiration, awesome thoughts in great manner like you. I thank you for such a Amazing , Motivational & Excellent articles & answers you wrote … END_OF_DOCUMENT_TOKEN_TO_BE_REPLACED