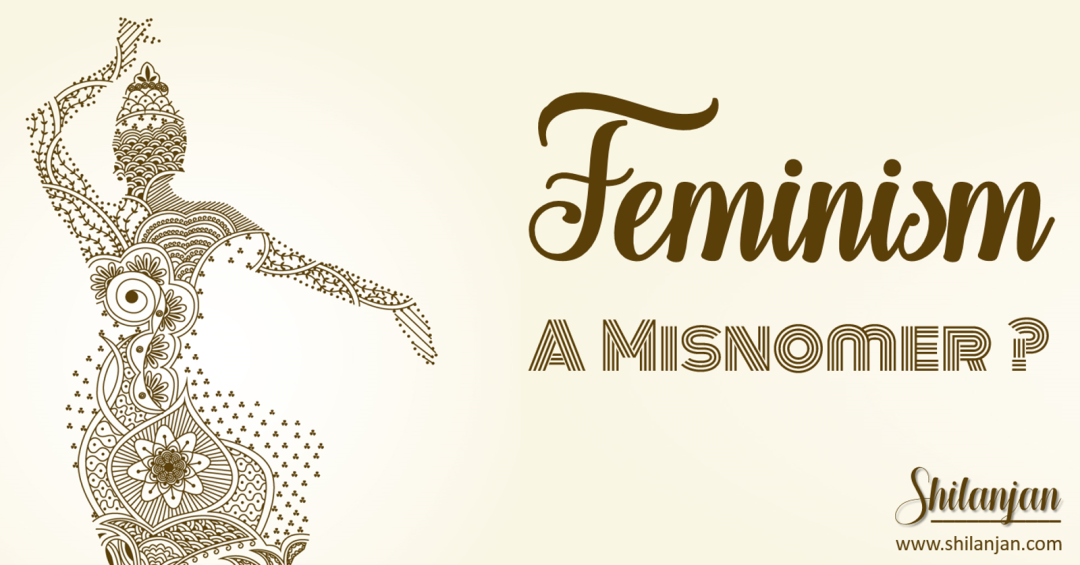 Is Feminism A Misnomer For The Cause It Stands For?

Owing to malevolent societal paradigms and practices like patriarchy and others, the female sex had been and is still somewhat oppressed when compared to their counterpart sex. And, there are a plenty such examples to enumerate here which plague our society in the present.

The women being paid lesser than their gender counterparts at the same position in the corporate ladder. Or, the female child not being allowed to study further for she would leave the home one day.

Or, how the promotion of a female employee by a male boss is often viewed in the lieu of a sexual favour or the bias of beauty and not the actual ability, ken and impeccable efficacy with which she delivers on her job.

Or, maybe the branding of a girl as a slut and spoilt for she wears a crop top which shows her navel. Or, maybe for her bra’s strap is overtly visible on her shoulder. Or, maybe because she is wearing a semi transparent/white clothing which makes her inners more visible.

The same people don’t bash the males when they roam on the streets in shirtless attires, clad in just vests or wearing shorts or boxers. And, most importantly, they don’t care much about the overtly visible underwear straps above the butts of the boys wearing the lowly hanging pants.

Or, take the example of my College itself which despite being a residential campus with excellent security arrangements, has a hostel closing time for the girls as 10 pm while no such restriction exists for the boys. Is the college’s campus safe enough for the boys but not for the girls?

I can go on with such examples. There are numerous cases which are too grisly for me to type out in the current mindset. But, we all know it well that those things do exist. Such matters are of grave importance for almost half of the world’s population deals with same or similar issues.

Fettering half of us breathing humans on the planet by such antiquated restrictions is not helping the society improve, or the culture prevail. Rather it’s only pushing us farther deep into that abyss of rot.

And, yet every day we walk around thumping chests for a booming economy, roads becoming pothole free and how the army is defending the nation’s porous borders from the living elements who can be better termed as the nemesis of peace and life.

I am not saying that either of those things is bad, or should not be talked about. No, not at all. They are all positives for our society and we must be proud of them and should think how we can push those positives to turn into even greater phenomena.

But, at the same time, those positives should also include the measures to improve the lives of these females who have adorned our lives for as long as we can remember and bless us with life enduring the pain and surviving the physical changes that none of us males can even dare to endure.

The females deserve better of us. They deserve support from the society so that they get to share the dais of equality which vices like patriarchy and others have devoid them of. Only then we would be able to say that humanity is flourishing just as the positives in domains of economy, education and peace in the society.

Furthermore, the liberation of our beloved ladies is also going to augment our progress in the other aspects that we ardently talk about on a daily affair like the economy, politics and education as mentioned above.

Be it education, employment, charity or political power, or whatsoever, if we can ensure that very interested female gets an equal opportunity to make an impact, succeed and evolve the world would be a way better place to experience with the females too getting to live the life they deserve just as much as the males.

Ergo, there is a need for us to ensure equal opportunities for all beyond the bias of gender. And, that is the cause which feminism is all about. It’s not just about the atrocities and woes that women have to bear because of the quaint structures our society has been framed into.

It’s a movement to ensure one is empowered enough to live on their own terms, discern the rightful for themselves and the society and move forward accordingly for self and others, without the barrier of gender raising any bumps. That’s feminism.

It’s all about promulgating the message of egalitarianism. It’s about equal opportunity for one and all despite them being a male, female or a transgender. And, that is where the term “Feminism” acts as a misfit for the movement it defines.

Despite the noble intention and wise minds pushing for the cause, what the term- Feminism- seems to a layman is that it’s a movement that is only going to benefit the females of the society.

And, that in my view raises the doubt if next up a few decades later there would be another such movement for the equal rights for our transgender fellows. The purpose of the movement was equality for one and all and if the name it has been given has the power to mislead one from that cause, it can prove to be a blunder in the times to come.

Furthermore, most of those laymen go on to extrapolate it to the stretches that suggest- The feminists wish to accomplish this at the expense of opportunities and privileges that males enjoy in the extant society. Again that is because since the movement was named after only one gender despite being about equality for all genders.

And, that causes a hell lot of misunderstandings. The situation has only vitiated over the course as several women too have begun to assume feminism to be something way out of its context. They have begun to relate subjects to the brand feminism that are totally impertinent to it.

Albeit most females may not agree with what I just wrote above. However, the growing radicalism among a small (or maybe even larger) section of women, which the likes of me often refer to as rising Feminazism speaks for itself.

Vogue India and Deepika Padukone’s video that was released about two years back from this writing only adds impetus to the message I have tried to underscore in this post. They featured 100 well to do women talking about things that had nothing to do with feminism and was all about gender superiority.

Yet, the video received a phenomenal response only to be later be bashed up by other lettered people (Including me). And, it has all happened in my perspective because of the skewed meaning the people have taken away from the inappropriately coined term- Feminism- for a movement meant for equality among the sexes.

Ergo, I do believe a term like Egalitarianism would have done much justice to this noble movement for the prosperity of the individuals whatsoever their sex maybe. I wish as time passes, the movement serves the purpose and intent that it began with and does not get mired into superfluous matters and controversies.

Or as they say, A Feminist.

I stumbled upon Jayant’s work on Quora. Jayant mostly writes about life, learnings and his personal experiences but his style sets him apart. He immediately catches your eye. The crisp refreshing tone will hold you to read more and more. Jayant always has a story to tell. You can feel his enthusiasm and positivity as … END_OF_DOCUMENT_TOKEN_TO_BE_REPLACED